Known as the race that “stops a nation”, the Melbourne Cup is fast approaching. The prestigious Australian flat horse race will take place on 2nd November in 2021 and is more exciting than ever. The Lexus Melbourne Cup with its $8 million prize pool – the highest in the world for its type – is the proud centrepiece of the Melbourne Cup Carnival event.

Along with some truly great Melbourne Cup betting markets, there are numerous additional races and exciting social events that are guaranteed to keep everyone entertained. Below you will find a complete guide of all you need to know about the flat race event as a punter.

Place your best horse racing bets at Betfair!
FIND OUT WHY
T&Cs APPLY, 18+ ONLY #AD

The Australian Melbourne Cup 2021, part of a four-day carnival, takes place on November 2nd at the Flemington Racecourse with a distance of 3,200 metres. The prize fund of a whopping $8 million makes this the richest two-mile handicap in world racing! Check below for the latest Melbourne Cup tips and odds.

The field for the 2021 Melbourne Cup is getting closer to being confirmed and will likely be finalised in the days leading up to post time. As the current betting markets suggest, the Caulfield Cup winning Incentivise is on track to be one of the shortest-priced favourites in recent history and is presently the leading favourite at 6/4, with Spanish Mission a more reasonably priced 11/2. Although this is likely to be a 24 horse race, the bookies and the punters clearly believe that this is likely to play out as a two horse race between these two. Andrew Balding’s Spanish Mission, who went close to knocking off European champion Stradivarius at York in August, is moving inward in the market.

Last year’s winner Twilight Payment holds the middle of the betting at around 14/1. The Joseph O’Brien trained horse is back to defend his title and is coming off the back of two good runs in Ireland which includes a Group Three win at The Curragh in the Irish St Leger Trial, a run which preceded a runner-up in the main race. Tralee Rose, who avoids a weight penalty for her Geelong Cup success in Group Three company, is also within contention. 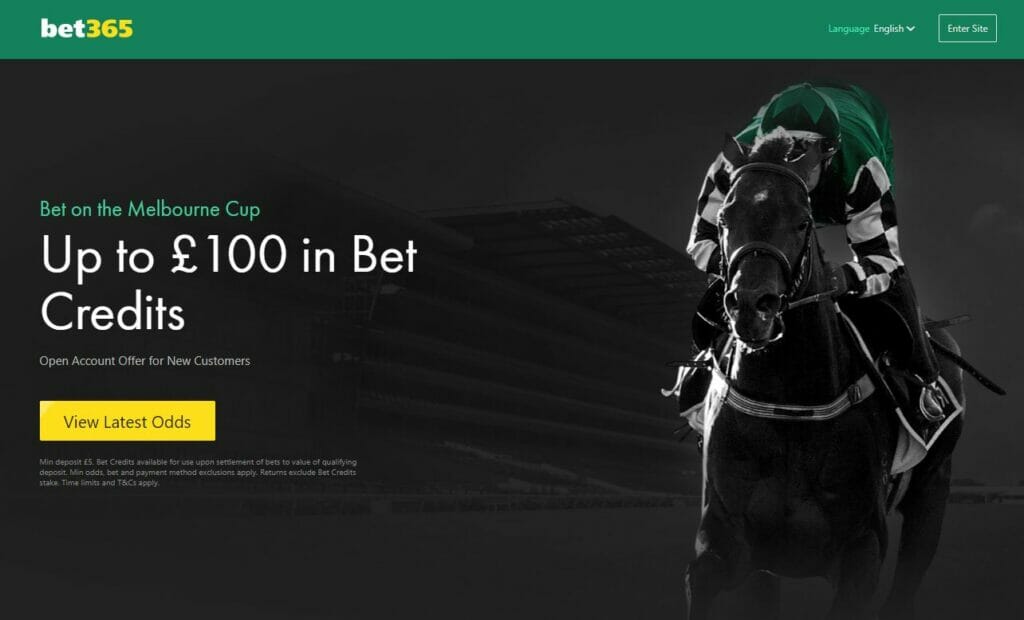 5 Reasons to Bet on the Melbourne Cup

The Melbourne Cup attracts considerable betting activity, exceeding other horse racing events in Australia. Although betting turnover decreased slightly (about 15%) in recent years, mostly due to the global financial crisis, it actually reached record levels for the 2020 event despite the pandemic. The Melbourne Cup has a turnover of close to $100 million at Australian betting sites, and it is customary to pay more extensive dividends due to the large open field. The more commonplace bets include the below five main options casual and regular punters use to bet on the Melbourne Cup:

A straight-out win bet on a horse at the Melbourne Cup is extremely popular among punters. If the horse doesn't win the race, then you lose the bet. Win bets pay out more than simple place bets (see below); however, they only pay out for the first place in the race.

People often mention backing a horse each-way. That terminology essentially means betting on a specific horse to win the race or place highly. If you place a £10 each-way bet on a horse at the Melbourne Cup, it costs you £20, since you are putting £10 on a horse to win and another £10 on the horse to place in the race. Should your horse win, then you get paid both ways; but if your horse finishes among the places, you only get paid at the terms your bookie set pre-race.

A quinella is when you place a bet on the two horses you believe will win the race and come home in second. It won't matter which order the horses come in, as you still receive your payout dividend. A quinella bet is the most straightforward and simple of all the multiple bet types available at the Melbourne Cup.

Another common type of multiple bets at the Melbourne Cup are the trifecta bets. A trifecta is when you place a stake on the horse you believe will end up running in the first three placed at the race. It is a lot more challenging to win a Trifecta bet, although the payout dividends are far superior to quinella bets. A trifecta bet starts from as little as £0.50 and may even be part of a boxed bet, where horses can run in any order; or straight out trifecta bets, where horses need to run in their chosen order.

Tournament Structure for the Melbourne Cup

The Lexus Melbourne Cup is run over a distance of 3,200 metres, and is widely regarded as the most prestigious Australian event on the horse racing calendar. Usually commencing on the first Tuesday of November, there are ten races in all, with the seventh Cup race starting at 3 pm. Most schools and businesses stop for the majority of Cup Day, as the public tunes into the race on TV and radio; hence why it is known as “the race that stops a nation”.

Hundreds of thoroughbreds are nominated for the Melbourne Cup. Various acceptances lead up to the race, whereby connections pay a fee to continue with their mission to make the field at the Melbourne Cup. That is determined by horses who have already won worldwide group races of longer than 2,400 metres. Nominated horses are balloted out based on past two years’ prize money, previous wins and placings, as well as allocated handicap weight.

Currently, there are no less than 174 horses that remain on track and nominated for the race. Cup Day will see ten races throughout the day, with varying distances and prizes on offer for each race.

The Flemington racecourse has been home to the Melbourne Cup ever since the inaugural event back in 1864, which is part of this old race’s charm. The racecourse circumference is 2,312 metres, and the surrounding areas bring up the total to 1.27km. The Melbourne Cup barrier draw is on Victoria Derby day at the beginning of November. On Derby Day, the Lexus Stakes provides another opportunity to qualify for entry into the Melbourne Cup.

The VRC customarily announces the last Melbourne Cup field and the barriers at no later than 5.30 pm. There are hundreds of nominations for the Melbourne Cup every year; however, only twenty-four runners will make it to the final field, so the majority of horses nominated won't get the chance to start in the race.

The race itself, held on a public holiday, is part of a four-day spring carnival when Aussies let their hair down and enjoy themselves with sport, entertainment, fashion and food. It marks a time when racing, often overshadowed by Aussie rules football and cricket, takes a front seat for a change.

History of the Melbourne Cup

The Australian Melbourne Cup has become a premier horse race with three-year-old horses racing a distance of 3,200 metres, and it has a chequered history dating back to 1861 after it was conceived by the VTC (Victoria Turf Club). The inaugural running of the race was in November and attracted many top rated horses, including the winner, Archer, from New South Wales.

Only a handful of horses have won the race more than once. With an increase in weights and adverse conditions, only an exceptional horse can win the Melbourne Cup.

The graceful Makybe Diva bucked the trend with three victories at the Melbourne Cup. Archer was another notable champion, winning the first two editions of the Melbourne Cup. Australia’s most well-known horse – Phar Lap, won the cup in 1930, cementing his place in Australian folklore. Way back in 1861, Archer started the first arduous Melbourne Cup journey from Nowra NSW and on to Flemington for a glorious win. A year later, he doubled up his cup victory, gifting trainer-owner Etienne de Mestre the second of an ultimate five Melbourne Cup trophy. That record remained in place until 1977. In 2015, the race saw its first ever female jockey winner, when Michelle Payne won on Prince of Penzance.

The inaugural Melbourne Cup had a prize pool of 710 pounds; however, the prize money has now ballooned to over $8 million, making it one of the world’s richest horse races and the richest two-mile handicap. The Melbourne Cup takes place at the Victoria Racing Club, and is undoubtedly Australia’s most popular televised event every year.

Similar Races to the Melbourne Cup

Among the many online bookmakers that offer betting markets for the Melbourne Cup, we recommend Betfair, Paddy Power, and 32Red.
You can watch the Melbourne Cup on Sky Sports.
The 2021 Melbourne Cup commences on Tuesday 2nd November at the Flemington Racecourse, Victoria, Australia. It is part of a four-day carnival that begins on 30 October 2021.
There are 24 horses in contention at the Melbourne Cup. Hundreds of horses are nominated for the race every year, based on the unique balloting system. After handicapping, the number decreases to 24 after the Lexus Stakes, Derby Day running.
Yes, many online bookies have streaming services for the 2021 Melbourne Cup. Moreover, you can watch the race from anywhere if you use a mobile device.

The Melbourne Cup is the most anticipated horse racing event in the Australian calendar. Millions of punters watch the event, with online bookies providing attractive odds and betting markets. You can also watch the Melbourne Cup this November via streaming services from online bookmakers, enhancing your Melbourne Cup betting experience. Which horse will win this year? Only time will tell!