Following its cancellation in 2020 due to the pandemic, the Rugby Autumn Internationals (also referred to as the End-of-year Internationals), are a series of rugby tests where teams from the southern hemisphere visit the northern half of the globe. Read on to find out about Autumn Internationals betting, its tournament structure, and why it promises to be a fascinating watch.

Teams such as Australia, New Zealand and South Africa will take on European nations, namely England, Scotland and Wales. The USA was due to host Ireland in Las Vegas but that has since been cancelled. In total, there will be 21 matches featuring rugby-playing nations from the top two tiers of the sport.

With the series just being a collection of test fixtures, there is no overall winner of this event, although teams can climb the world ranking table if performances are good. Below, we have listed this year’s fixtures.

The Autumn Internationals 2021 makes its very welcome return on the 30th October when Scotland host Tonga at Murrayfield, and ends when the Barbarians take on Samoa at Twickenham on the 27th November. One of the series' highlights will undoubtedly be when England take on Australia at London’s Twickenham stadium. If you are looking for the England v Australia Rugby betting odds, then they will be with you shortly.

Each day of the series, individual match betting odds will be available for many of the matches being played that day. However, there are no outright odds as this series has no winner and is not a tournament as such.

There are no outright rugby betting tips for this event because it is not a tournament that plays down to a winner. Rather, it is a series of games where the northern hemisphere teams host those from the southern hemisphere.

5 Reasons To Bet on the Autumn Internationals

With all of the leading rugby nations in action, the Autumn Internationals is one of the highlights of the rugby year. Because of the teams involved, many exciting rugby betting markets open up around the series. Here are some:

Although there are three outcomes, draws are quite hard to come by in rugby, so most of the time you’re essentially choosing between which of the two teams will triumph. Not only can this be done pre-match, but most bookmakers will also offer you the chance to bet in-play right until the final whistle goes.

With a winning margin bet, punters are able to predict the size of the margin that a nominated team will win an upcoming rugby match by. The bookmakers will set a number of margins of victories, and bettors can select the one they believe is the most likely outcome. This type of bet is a handy way of getting better odds when two teams of mismatched quality are playing a match.

Total Points Odd or Even Betting

For this bet, punters need to predict whether the total number of points scored in a match will be an odd amount or an even one. This applies to the total number scored by both teams added together, not the one scored by an individual team. There isn’t any particular skill required for this wager and there are only two options, but you can make educated guesses by working out beforehand the playing style of the two teams involved. All points scored in rugby (save for conversions – which only occur after tries have been scored) are worth an odd amount of points.

Another popular bet that will keep going till the end of the competition is the top tryscorer. One of the main targets in rugby is to score a try. It’s the fastest way to score big points in a match, and for that reason, it’s very difficult to score one – we see less than 5 per game on average.

When betting on this market, you’re predicting which player will conclude the tournament with the highest number of tries. Given each team has 15 players plus subs, there are loads of options to try your hand at in this market. Those who fancy a punt could be tempted to back the generous odds on players on the lower end of the market. 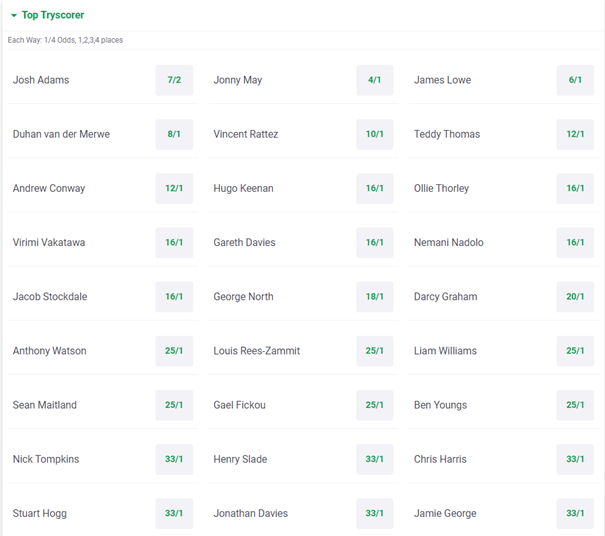 History of the Autumn Internationals

The first ever Autumn Internationals were held in November 2000. Argentina participated as a touring side, along with Australia, Canada, Japan, New Zealand, Romania, Samoa, South Africa and the USA. The Six Nations – England, Scotland, Wales, Ireland, France and Italy were the hosts.

In 2020, the Autumn International Series was replaced for one year only by the Autumn Nations Cup – a tournament that England won and was played behind closed doors due to the worldwide pandemic.

There are no past winners of the Autumn Internationals as this is a series of unrelated test matches and not a tournament. When the series was cancelled in 2020 to be replaced temporarily by the Autumn Nations Cup, there was a tournament format which led to a final between Wales and England, which the latter won.

Similar Tournaments to the Autumn Internationals

The Autumn Internationals looks set to be a sporting spectacle that will thrill –  a welcome bright spot during what’s been a very uncertain year.

Taking place in Europe annually each November and December, these tests are traditionally contested between the giants of rugby from the northern and southern hemispheres. These are the Six Nations participants (England, Ireland, Wales, Scotland, France and Italy), and the Tri-Nations regulars (Australia, New Zealand and South Africa), plus Argentina, Samoa, Fiji and Tonga – who refer to the series as the Spring Tours.

Although the Autumn Internationals are not a stand-alone Rugby Union tournament in their own right, they do count towards world rankings. There is also the chance for touring nations to complete a Grand Slam by beating the four home nations of England, Ireland, Scotland and Wales. There certainly won’t be a lack of opportunity for punters, stretching on right till the very end of the tournament!