The AFL finals are the culmination of the best Australian rules football has to offer. Whether you’re new to the AFL in general or are already a big fan and want some hints on how to improve your bets, we’ve got everything you need – including tips, predictions, relevant promotions and even the best bookies for AFL finals 2022 betting.

Even if you haven’t been paying close attention to the 2022 AFL season, there are still no barriers to getting involved now – the way the competition is structured is so simple you can drop in at any point without feeling lost. Here’s all you need to know to wrap your head around the AFL finals fixtures. 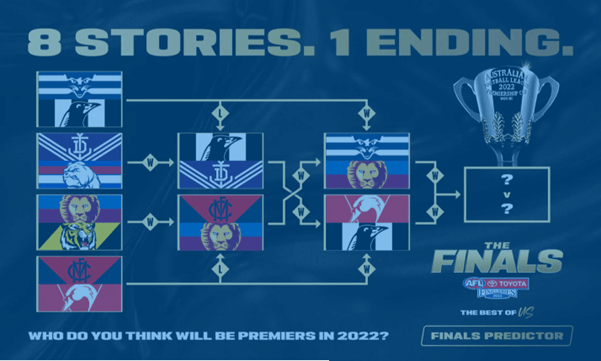 So, what would help our readers make the smartest wagers possible with the AFL finals 2022? Well, we’ve got the most competitive odds so you know what’s on offer, as well as some expert tips and predictions to help you make sense of those markets – a perfect foundation for better betting.

The AFL Grand Finals take place on 24th September, with the finalists being decided at the preliminaries held on the 16th and 17th of September. While odds are of course available on those games for anyone interested, our focus here is on the betting odds for the AFL Grand Finals showdown. This is the best our favourite bookies have to offer on the four remaining possible AFL premiers.

Here are some simple tips to help you optimise your own betting strategy and better identify the right markets for you when it comes to AFL finals 2022 betting.

We love a good underdog here – after all, that’s where you get your biggest returns. However, we’re going to have to agree with the bookmakers on this one. We do think that your finals will consist of the two favourites, Geelong and Sydney Swans, due to the consistent quality of their performances throughout the season.

And we’re also backing the favourites to win the whole thing. Often the bookies are off with their odds, but we can’t argue with their logic much here – just look at the 2022 AFL season standings. They were 8 points ahead of their nearest rival and haven’t lost since they fell to St Kilda on May 22nd, 2022, their fourth loss of the entire season. Their narrow victory over Collingwood showed they aren’t infallible, but to us still appear as likely champions.

The Gary Ayres Medal recognises who is considered the best player of the season. While that’s a pretty difficult thing to predict until the final game is played, we’re backing Luke Parker (Sydney) to take this prestigious award. There are other prime candidates in the likes of Lachie Neale (Brisbane) and Jordan De Goey (Collingwood). However, we think Parker’s team Sydney are going to make the final and that he could be a major factor in these last two AFL finals fixtures, and that may push him over the top here.

It’s been quite the season and there’s growing anticipation for that showdown on the 24th. The hope is that they are going to play in front of 100,000 fans at Melbourne Cricket Ground in what will truly be a historic AFL Grand Finals. Considering they are coming off two years of restricted crowds due to Covid precautions and generally, demand has been immense for the AFL finals, our prediction is simple…we think they’re going to do it.

We’ve got a few final contenders for the most goals in the AFL finals fixtures, with each team having a viable candidate. It could very well be the amazing Eric Hipwood (Brisbane), Jack Ginnivan (Collingwood) or Isaac Heeney (Sydney). However, based on our prediction for finals winners, we’re going with Geelong’s Jeremy Cameron. This is down to how adamant he is on his fitness following a hamstring injury, and an amazing record of 62 goals across 22 games in the AFL 2022 season.

Whether they are offers specific to these finals or more general sporting promotions, have no doubt you’ll be spoiled for bonuses at the best Aussie Rules betting sites.

Here’s a small snippet of what’s out there.

Reasons To Bet on AFL Finals

Unfortunately, live streaming of AFL games via bookmakers is generally not available at the time of writing for licensing reasons. If you live outside of Australia, the best way to watch the games is through WatchAFL, a streaming service which offers a 2022 finals pass for £52. That said, plenty of great betting sites do offer excellent live coverage through information and graphics.

Multi-faceted and action packed, Australian Rules football enjoys one of the largest selections of betting markets of any sport. While plenty more is available, we’re going to show you five of the most popular markets to get you started.

Put simply, you can back a team to win their individual AFL finals fixtures or the entire tournament. This market is a classic, the bedrock upon which so many other more left-field markets lie.

Handicap betting is hugely popular for Aussie Rules football and is especially worth considering during the AFL finals 2022. This allows you to bridge the gap between mismatched teams and demand either that the favourite win by more than the handicap, or the underdog to lose by less than that amount. This certainly adds intrigue to the game.

Why back a team to win at all? If you’re stuck on who to back, then rest assured that the finest AFL finals sites have you covered. You can simply bet on whether the finals score will be over or under a certain amount.

One way to kick a game off with a bang is to bet on who will score first – no need to wait for the final score to see if you’ve won your bet. If the point of betting is to make your favourite sports even more exciting, there might not be a better example than this.

Alongside the many markets which bless each game of the AFL finals, there’s also a terrific selection of futures, including the Gary Ayres Medal Winner. Essentially, the coaches vote on a weekly basis on the top players to receive the honour of being considered the best player in the AFL finals. What’s interesting here is you are predicting the opinion of a group of experts, rather than something objective like a score line.

The history of the AFL is vast, so these are just some key points to give you an idea of how we have come to the current iteration of the AFL finals.

Many of you will be surprised to learn that the AFL finals have their origins back in the late 19th century, when the Victorian Football League was established in 1896. It consisted of eight clubs. The Melbourne Cricket Ground, even then, was the primary venue for the finals.

The version of the tournament used now began in 2000 and is known as the AFL final eight system.

Two significant changes took place in 1987, when the VFL expanded interstate, allowing non-Victorian clubs to host finals. This paved the way for the change from the VFL to the AFL finals in 1989.

A couple of years later in 1991, the rules were changed to allow for extra time to be played in the AFL finals. Previously, any draw would lead to a replay the following weekend and a delay of a week for all other teams.

Like so many sporting events, the AFL finals were hit hard by the impact of the pandemic – games were cancelled, venues changed, crowds restricted, which required massive changes to the tournament. The AFL finals 2022 is significant because it is the first since 2019 to not face huge crowd or venue restrictions owing to the pandemic.

It takes place between the 1st and 24th September.
The AFL finals consists of eight different teams. In 2022 they are Geelong, Melbourne, Sydney, Collingwood, Fremantle, Brisbane Lions, Richmond, and Western Bulldogs.
All eight teams which make it to the finals series qualify through the regular AFL season. 23 games are played across 18 teams, with four points being awarded for a win and two being awarded for a draw. The top two eight teams then make it to the AFL finals.
The AFL finals is a knockout competition consisting of qualifying, semi-finals, preliminary finals, and the AFL Grand Finals. If a team wins, they move forward, if they lose, they are out, until a champion is crowned.
There are many great bookies that provide AFL markets. Our favourites include bet365, SBK, Betfair, Paddy Power, and Unibet.

The 2022 season of the AFL finals is coming to a close, and if you’re wondering whether there is still time to get involved, the answer is yes. Even total newcomers can find this tournament easy to follow and bet on, while experts have all the market variety and sporting depth they could ever want. It’s exciting, action-packed, and historic.

This also means there’ll be competitive odds, awesome market variety and promotional goodies to be enjoyed as the best bookies do everything they can to get your attention. This year’s AFL Grand Final is looking like an absolute feast for all sports and betting fans, and we cannot recommend it highly enough to both.