This website uses cookies. By continuing to browse the site, you are agreeing to our use of cookies
TPPBest Football Betting Sites Vanarama National League Guide

Away from the glitz and glamour of the Premier League, the EFL is the Non-League football pyramid, with National League betting having become increasingly popular recently. The National League – or Conference as it was previously known – is one division below League Two and one division above its two regional leagues, known as the National League North/South respectively. Despite its lowly standing, these leagues are becoming a favourite among punters looking for great value.

Tournament Structure for the National League 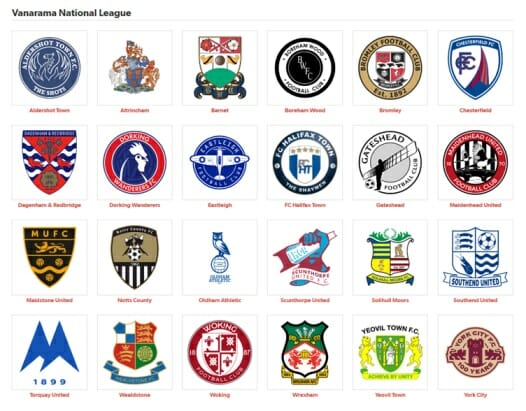 The National League consists of 24 different teams from across England and Wales. Three points are awarded for a win, one for a draw and zero for a loss. In the case of two teams being on equal points comes the season’s end, they will be separated by goal difference.

There is only one automatic promotion spot in the National League, which goes to the side who finishes top. The only other way to progress into the EFL League Two is via the playoff.

Teams placed second through to seventh compete in one-legged, straight knockout playoff matches. The teams who finish second and third receive a bye into the playoff semi-finals, while everyone else is placed into the quarter finals. The winner of the final – usually played at Wembley in June, although had to be moved to the London Stadium in 2022 due to England playing at Wembley – is set to receive a trophy and a place in the Football League.

At the other end of the table, there are four available relegation spots. The bottom-four teams each season are relegated to the National League South or National League North, depending on their location.

The 2022/2023 National League is set to be one of the closest campaigns in recent memory. Here are the very best odds for the most popular markets, provided by some of the best bookmakers for football.

The 2021-22 National League season was one of the most dramatic campaigns there has ever been.

Stockport County were the ones who were celebrating the most at the end of it. They won the title by six points from Wrexham, but only secured the champions tag on the final day of the season.

That left Wrexham to join Notts County, Halifax, Solihull Moors, Chesterfield and Grimsby Town in the playoffs, and after a playoff series that had a number of brilliant matches, it was Paul Hurst’s Grimsby side who were the ones to follow Stockport back into the Football League.

They won away to Notts County, Wrexham and then beat Solihull Moors in the final to achieve promotion at the first time of asking, while Solihull beat Chesterfield to get to that point. Chesterfield earlier saw off Halifax.

Chesterfield were the ones looking back and wondering what might have been, as at Christmas it looked like they were firing their way to the title; however, off-field issues with manager James Rowe derailed their title charge, while injuries didn’t help either. Eventually, they succumbed in the playoffs.

Southend United were the other team relegated into this division in 2020-21. They were always going to need a season of transition with a new set-up in place, though, and will be hoping for much better than 13th in 2022-23.

The top scorer honours went to Paul Mullin, the expensive recruit at Wrexham. His 26 goals was enough to win the Golden Boot by two goals from Kabongo Tshimanga, whose season was curtailed early because of injury.

Much like the EFL Championship and League One, the National Conference League provides players with betting markets to suit your every preference. Here are some of the most popular.

This is one of the most popular forms of National League betting. Simply put, bettors place a wager on who they think will finish top of the pile come the end of the season. The odds for this will shorten as the season progresses. In order to maximise the value of this bet, make sure you decide on which Conference team you will be backing in the first few weeks of the campaign.

As the National League employs a playoff system – more about that below – bettors can also select which teams they think will get promoted, but not finish top of the league. As the playoff is a lottery, there is often great value to be found in this market. In the past, many National League teams have shocked the pundits by securing an unlikely promotion. It’s your job to select the next great underdog story.

Along with betting on a team’s performances, there is also a lively Top Goalscorer market for the National League. This is the player who scores the most goals in a specific season. Make sure you check out which players have been in hot form before selecting your bet for this one.

There are multiple relegation places on offer in the National League, which gives bettors some room to manoeuvre when selecting which teams they are tipping to struggle. An analysis of each side’s summer transfer business can help with this particular wager. 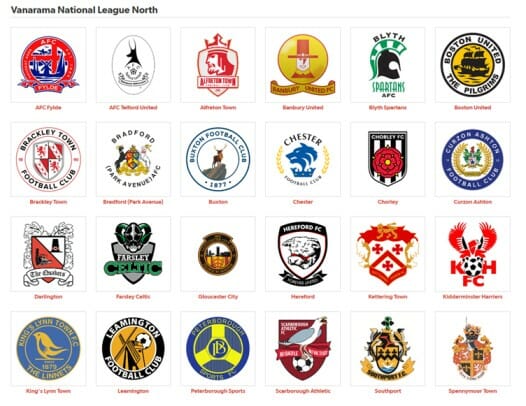 The National League North is made up of 22 teams, largely situated in the northern part of England. There is one automatic promotion spot on offer for the title winners, while there is also a playoff system in place.

Much like the National League, teams who finish from between second and seventh place qualify for the playoffs, while the top two get a bye into the semi finals. The final of the playoffs is not held at a neutral ground; instead, it is hosted at the stadium of the team who finished higher in the league.

At the bottom, there are four relegation spots. Those teams who end up getting relegated get placed in one of the National League North’s four feeder leagues, normally the Northern Premier Division. 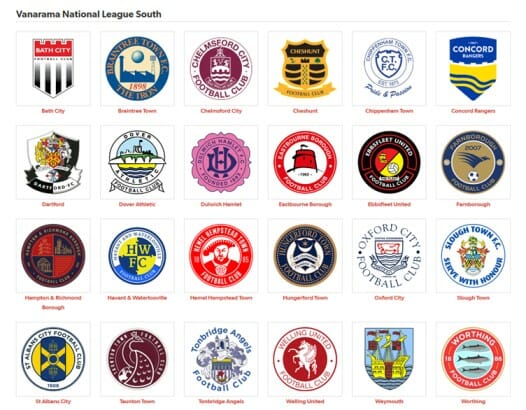 The National League South has 24 teams – thanks to an upcoming restructuring of the Non-League pyramid – as well as a promotion and playoff system identical to its Northern counterparts.

This season, there are four relegation spots on offer. The demoted teams will end up being placed in one of the National League South feeder leagues.

Based on our research, the best National league bookies are Paddy Power, Coral, and Betfred.
During the 2022/2023 season, 24 different teams will play in the National League. Each team will play each other home and away for a total of 46 games.
Teams that finish second, third, fourth, fifth, sixth and seventh qualify for the Vanarama National League playoffs, while the second and third receive a bye to the semi finals. All the ties are one-legged affairs, with the final being played at Wembley Stadium in June.
The National League North/South are two regionalised feeder leagues. Those who get promoted from these divisions – either by finishing first or winning the playoffs – are placed into the National League.
There are plenty of options for bettors wishing to place a wager on the Conference League. Outright markets such as title winners, the Golden Boot, and relegation are available, while bets can also be placed on specific games.

Do not be put off by the National League’s lowly status in the English football pyramid. The division is still a great option for bettors, with odds offered by the majority of UK betting sites. There is a lot of enjoyment to be had, so be sure not to miss out – join the Non-League revolution today!