The Overwatch League (OWL) is organised by Blizzard Entertainment and consists of 20 competing teams. Here is all you need to know about the odds on offer for the Overwatch League, betting tips and strategies, popular Overwatch league betting variants, the League’s format, its history and more.

The Overwatch League consists of a Regular Season and ensuing Playoffs.

After the conclusion of the Regular Season, the top-ranked Atlantic Conference and Pacific Conference teams will automatically qualify for the Playoffs, along with the 3rd to 6th ranked teams, irrespective of their division.

Here is all you need to know about the odds on offer for the Overwatch League 2020, betting tips and predictions and popular betting variants.

We will display the odds on offer as soon as they are made available on betting sites – watch this space for the latest updates!

Before punting on the Overwatch League, you should go through the odds on offer at several of the best esports betting sites to find the best that are available. This will also help you determine the Overwatch teams that bookmakers favour; the teams with lower associated odds are more likely to win a match. We also recommend analysing game statistics such as official Overwatch rankings, team form guides, past match results and past Overwatch League results.

Doing the above will help you determine how a team in question has been faring in the lead up to the Overwatch League, its Overwatch League history and its probability of winning.

Playing Overwatch yourself can also help you better understand the game along with its various intricacies and tactics, as well as gain a first-hand experience of strategies and tactics that teams often employ during a match. 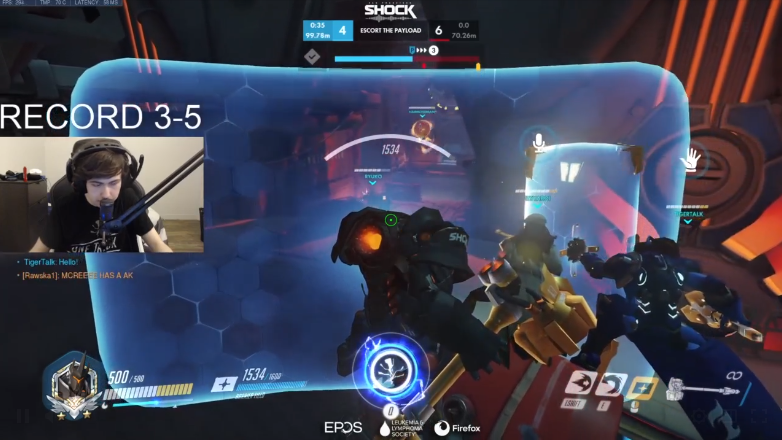 Don't forget to watch your favourite Overwatch teams play a few matches. This will help you figure out how a team usually strategises and whether it delegates specific roles to its members.

Judging the quality of the Supports of a team should give you a better understanding of how a team may fare against an aggressive opponent. Supports are crucial to a team's success, and the better a team’s Supports are, the likelier the team is to succeed.

Live streaming a match can also help boost your chances of winning at esports betting – it will enable you ride the momentum of an event and punt accordingly. The best esports streaming platforms are Twitch and YouTube, and renowned betting sites like Bet365 and Luckbox.

Do you prefer betting on football? Visit Kickform.com now to get the latest match stats, predictions, odds and tips on all the top European football leagues. It's free to use and uses a data-driven Football Formula to increase accuracy and reliability!

The Regular Season of the Overwatch League 2020 will take place from the 8th of February to the 9th of August, 2020.

*The Playoffs schedule is yet to be confirmed – we'll be back with the latest updates as soon as they are available!

We have compiled a list of the most popular Overwatch League betting variants. 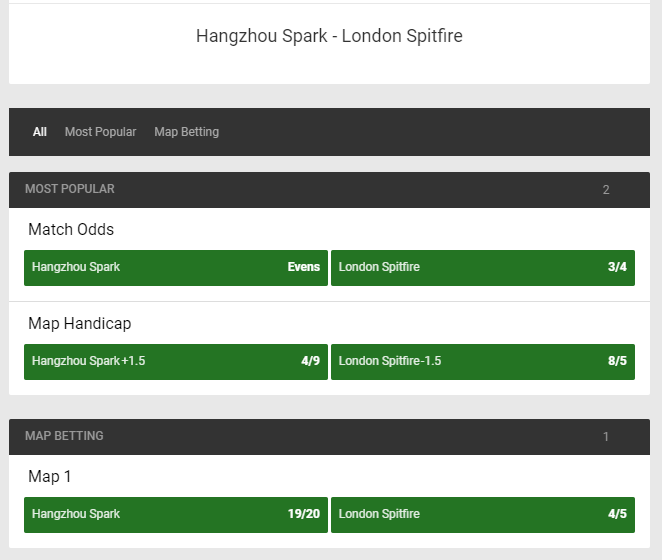 An “Outright Winner” bet requires you to determine the winner of the Overwatch League.

A “Match Odds” bet requires you to determine the winner of an Overwatch League match.

A “Map Winner” bet means that you need to predict the winner of a Map for an Overwatch League match.

From the above image we can see that Hangzhou Spark comes with odds of 19/20 to win Map 1, while London Spitfire come with odds 4/5 to win Map 1.

In essence, this means that Hangzhou Spark must win the match by a margin of 2 or more Maps, while London Spitfire must either win the match or lose by just the 1 Map.

A “Total Maps” bet requires you to predict the number of Maps that will be contested by both Overwatch teams during a match (Cumulative) over/under a number set by a bookmaker.

An Overwatch League 2020 Regular Season match between Toronto Defiant and Paris Eternal saw the highest viewership of the League with a peak audience of over 138,000.

20.
Global (Offline).
You can watch Overwatch League matches on eSports streaming platforms like Twitch, and YouTube, and renowned betting sites like Bet365, and Luckbox, among others.
Bet365, Luckbox, and Unibet among others.

A hit with both casual and professional gamers, Overwatch is set to become one of, if not the most, viewed and played games across in the globe in 2020. It's no surprise, therefore, that many top esports betting sites have opened markets for punters to place bets on the Overwatch League to ensure that nobody misses out on all the fun.

To boost your chances of winning, don't forget to bookmark this page to have some of the very best tips and strategies at your disposal. For more tips like the ones in this article, check out our ultimate beginner's guide to esports betting, as well as our detailed and comprehensive Overwatch betting guide.

Have fun and good luck!