StarCraft 2 Betting Guide – Everything You Need to Know

StarCraft II (also referred to in this article as StarCraft 2) is a science fiction, real-time strategy video game which has been published and developed by Blizzard Entertainment. Read on to learn about the most popular StarCraft 2 betting tips and predictions, sought-after tournaments and much more!

StarCraft 2 – About the Game

StarCraft II: Wings of Liberty is the sequel to the video game StarCraft and the Brood War expansion pack. The game was released in 2010, and was published and developed by Blizzard Entertainment. There are 3 game instalments:

A campaign pack titled StarCraft II: Nova Covert Ops was released in early 2016. The game has received great praise, but has been met with some criticism as well. While being praised for its alluring gameplay, storytelling, and the introduction of a plentiful of new features, the game has been criticized for its lack of an option for LAN play, and the inherent ability to switch between multiplayer regions – both of these options existed in the original game.

In 2017, StarCraft II was rebranded as a free-to-play game. This move was in line with Blizzard Entertainment's quest of supporting the game with microtransactions and unlocked the Wings of Liberty single player campaign and multiplayer mode, as well as two other game modes.

So far, so good – so how is StarCraft II played? Read on for our explanation below.

How Do You Play StarCraft 2?

Much like the original game, StarCraft II revolves around 3 species – the Terrans, the Zerg, and the Protoss.

While Wings of Liberty focuses on the Terrans, Heart of the Swarm focuses on the Zerg, and Legacy of the Void focuses on the Protoss. The game is set four years after the Brood War, and is centered on Jim Raynor – a bitter, heavy drinking, money-oriented captain, as he leads a group against the autocratic Terran Dominion.

While the game's storyline is linear, its campaign is non-linear, with Raynor taking up odd jobs for money in order to buy additional upgrades and units (Wings of Liberty). While Wings of Liberty has 29 playable campaign missions in all, only 26 of these are playable in a single playthrough. Several missions have unique features, like flowing lava, enemy units that will only attack at night and an AI-controlled enemy.

When it comes to playing StarCraft II tournaments, your objectives are to gather resources, expand your technology and build on your initial worker units and home base building – all while outwitting your opponent. The game is played in a 1 vs. 1 setting, and requires you to pick one of the three races. Team-based tournaments require you to pick up to four players for a match, each individual Map of which is contested on a 1 vs. 1 basis. 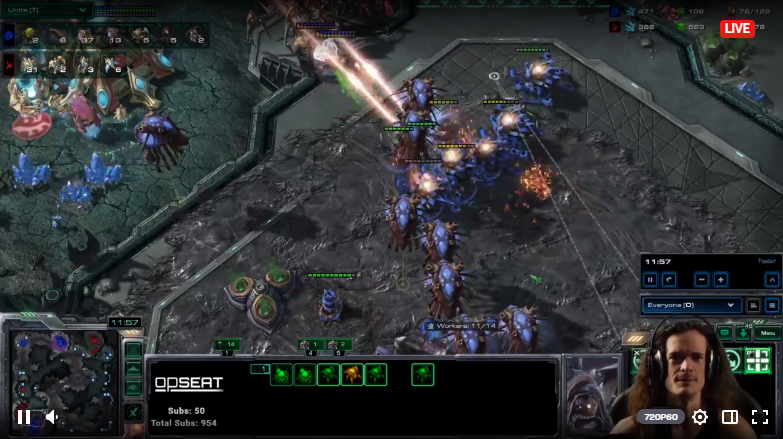 The Terrans (Humans) are characterized by good defense, mobility and the ability to repair buildings and units. The Zerg (a super-species) are characterized by cheap units built in quantity. Buildings must be built on creep, which in turn gives them a speed advantage on creep. It must be noted that drones sacrifice themselves to become buildings.

The Protoss (a technologically advanced species) are characterized with units and buildings that are equipped with a regenerative shield, expensive and strong units, and the ability to warp in units.

Before punting on a StarCraft II-based betting market, we fully recommend doing your research first. You should go through the StarCraft II odds on offer at several of the best esports betting sites, and choose a bookmaker which is offering the best quality of odds on the market that you would like to place a bet on.

Comparing the quality of the odds on offer on different betting portals will also enable you to determine the players that bookmakers favour. The lower the odds associated with a player are, the likelier it is that that player will win. It's a good idea to analyse official StarCraft II rankings, player form guides, match predictions, head-to-head results, and past tournament results to boost your chances of winning.

We also suggest actually playing StarCraft II yourself to better understand how the game works, and to understand its various complexities. As has been mentioned before, the game consists of 3 different species, each one of which is associated with a varying set of characteristics. If you play the game, you will get a first-hand experience of the various strategies that a player may employ throughout a match.

Once you have played the game, and understood its various intricacies, you can proceed to watch a few of your favourite players or highly ranked StarCraft II players play a few matches. This could help you understand how a player goes about a match, the various tactics he uses or may use during a game, and how the 3 species may fare against one another when operated by a professional gamer.

Never go by rankings alone. You may reap greater value off bets placed on lower-ranked players. Assess their skill set, watch their matches, and punt accordingly.

Live streaming matches is also extremely helpful, because it can help you to ride the momentum of a game and punt accordingly.

Finally, never settle for less and go for the top bookmakers in the business. On this note, we fully recommend Bet365, Luckbox and Unibet as the best betting sites for StarCraft II betting.

Mentioned below are a few of the most popular StarCraft II betting variants.

An “Outright Winner” bet requires you to successfully predict the winner of a StarCraft II tournament.

A “To Win” bet requires you to successfully predict the winner of a StarCraft II tournament-based match.

This means that MaNa must either win the match in question, or lose by just the 1 Map, while Trap must win by a margin of 2 or more Maps.

A “Total Maps” bet means that you need to predict the total number of Maps that will be contested by both teams during a professional StarCraft II match.

A “Map Winner” bet requires you to predict the winner of a Map in question throughout a professional StarCraft II match.

Here is a list of the most popular StarCraft II tournaments held throughout the year.

The AfreecaTV GSL Super Tournament 1 is organised by AfreecaTV and the ESL. The competition is the first Super tournament of the ESL Pro Tour. The tournament consists of 16 players and takes place at the AfreecaTVFreecUp Studio, Seoul. The tournament is played on a 1 vs. 1 basis, and comes with a prize pool of 30,000 USD.

The Global StarCraft II League consists of 2 seasons, which are both played at Seoul on an annual basis. The league is organised by the ESL, and AfreecaTV, and comes with 28 competing players per season. Each season has a prize pool of 140,000 USD, and is contested on a 1 vs. 1 basis.

Most Successful StarCraft 2 Players of All Time

At the time of its release, StarCraft II: Wings of Liberty became the fastest-selling real-time strategy game in history, with over 3 million copies of the game sold worldwide during its first month on the market. It also received an aggregated score of 93/100 on  Metacritic, 92.39 on GameRankings, and a whopping review score of 10/10 by GamesRadar+ and VideoGamer.com.

The 2019 StarCraft II World Champions Series came with a prize pool of $700,000 and a peak concurrent viewership of over 80,000 during the Global Finals (the tournament has since been discontinued).

Starcraft 2 has been named as one of the best esports titles currently available. Developed to focus on the more competitive aspects of gaming, it has not only been a massive hit with players who aspire to become professional gamers, but also with many esports betting fans.

We hope that all the Starcraft 2 eSport betting tips and strategies mentioned in this guide have been helpful, and don't forget to check out the esports betting sites that we recommended above (Bet365, Luckbox and Unibet) to get the best bang for your buck!