Treble Bet Explained – What Is A Treble Bet?

A treble bet is a type of accumulator that combines three distinct selections (or ‘legs,’ as they are commonly referred to) into one. In other words, three single bets come together to make a high-value bet that has only gained increasing popularity among punters of late.

What Is A Treble Bet?

It is an accumulator that rolls three distinct bets into one, instead of you placing three single bets. Remember that the three wagers must be on different sporting events. Should the first leg win, the returns are used as a stake for the second leg. Likewise, should the second bet come up as you had predicted, the returns from it would be used to stake on the third.

Also, you don’t have to bet on the same sport. You can mix and match here to step up the excitement. For example, you can back Rafa to win the French Open, a horse to win the Cheltenham Gold Cup, and Liverpool to win the Premier League.

NOTE: All the three legs will have to win if you were to take home a tidy profit. Even if one of the legs fails to turn up as you had predicted, you’ll lose the bet and your stake.

REMEMBER: A treble is always placed on three distinct sporting events. This means, you cannot bet on Nadal to take home the La Coup des Mousquetaires, Dominic Thiem to finish second, and Alexander Zverev at the third spot. That would be a tricast bet and not a treble.

Note that the three selections will have to be distinct from each other, and all of them must win if you were to get a pay-out. The obvious upside of placing a treble is that you can get higher odds vis-à-vis what you would’ve got had you bet on the three selections separately. In the UK, punters can place a treble on multiple sporting events across horse racing, football, tennis, and others.

An E/W treble refers to wagering on three selections to WIN and PLACE (i.e. runner-up or second runner-up). This is usually applicable to tennis and horse racing. An E/W bet consists of two components – WIN and PLACE. Should all the three selections win in their respective events, you earn a handsome profit that is worked out like a standard WIN treble.

Here is your ultimate guide to E/W betting 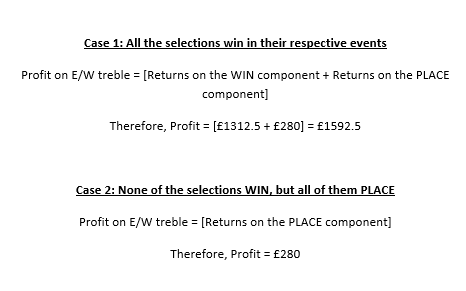 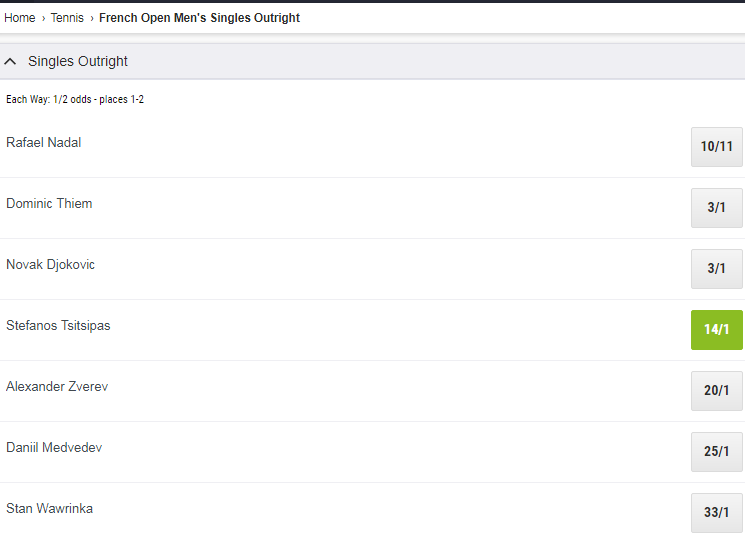 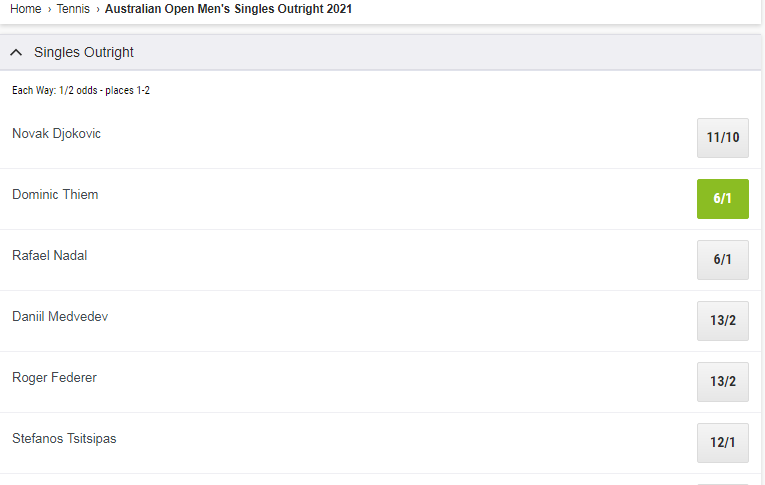 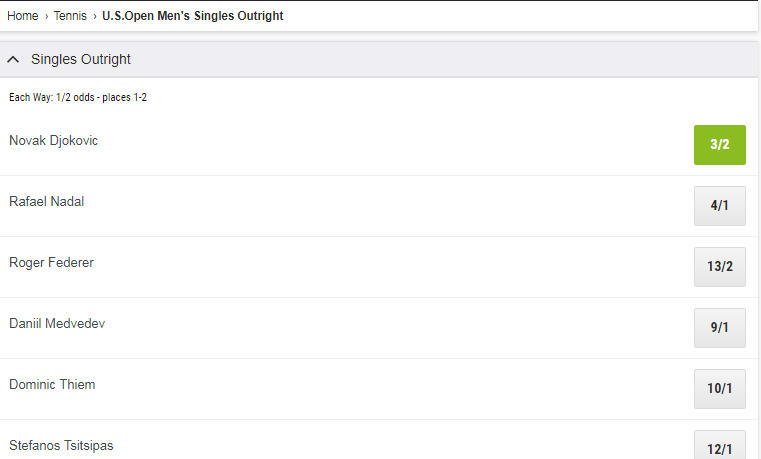 How Does Treble Bet Work?

That is precisely why you are likely to pocket much more as compared to what you would’ve got had the same stake been used across the three bets placed individually. This, however, comes at the risk of you losing the whole stake the moment the first selection loses.

What Is Treble Bet in Horse Racing?

Consider you fancy Honeysuckle to win the Champion Hurdle at 9/1, Gypsy Island to win the Mares’ Novices’ Hurdle at 8/1, and Ballyadam to win the Ballymore Novices’ Hurdle at 20/1 in the Cheltenham Festival Outright market. While you do not like the single bet odds on them, the Treble Bet odds of a whopping 1889/1 from Ladbrokes is music to your ears.

In case you are betting online, all you have to do is choose the three selections and head to the bet slip. There will be a provision to place a treble. Enter the stake to see your potential winnings. If you want to place an E/W treble, make sure to tick the E/W checkbox. 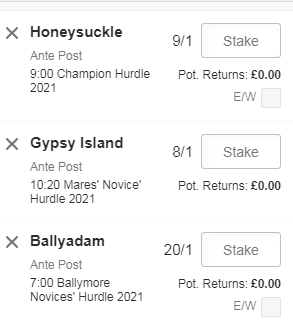 What Is Treble Bet in Football?

The interesting bit to placing a football treble is that you can mix and match various selections. A typical example involves Manchester City to beat Arsenal, Chelsea to beat Swansea, and Liverpool to win against Leicester City. However, you can also explore different markets. 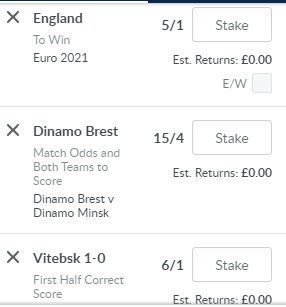 What Is Treble Bet in Tennis? 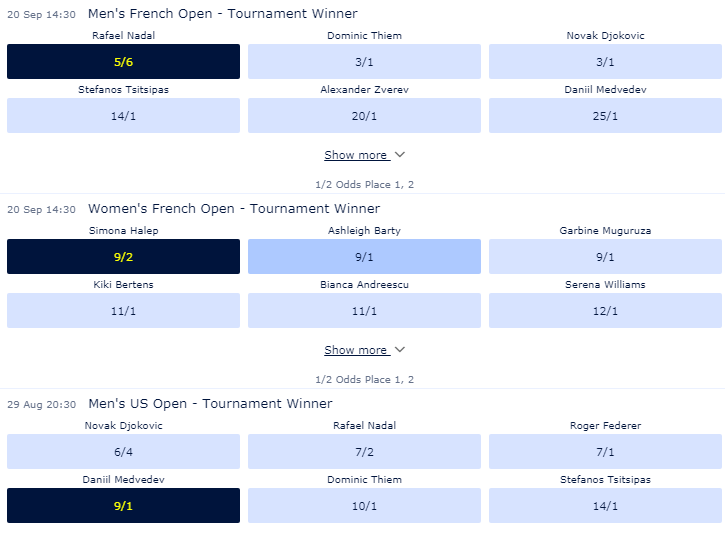 Like other accumulators, Treble Bet is a favourite among punters, considering the sizeable winnings that can be earned from a small stake. Single bets often have slight odds, something that makes them less rewarding as compared to a treble that offers combined odds. Of course, the longer odds have an inherent risk that any of the ‘legs’ failing to come through could let the entire bet down.

Also, you can back low-value favourites that wouldn’t have cut a profitable deal had you placed three single bets.

Let’s understand with an example:

The pay-out is then used as a stake on Liverpool to win at odds of 3/2.

This pay-out is again carried forward to stake on Watford to win at odds of 2/1.

Consider you had used three £5 stakes to bet on the selections individually.

How to Calculate Winnings from a Treble Bet

When it comes to working out Treble Bet returns, there is a simple step that you can follow:

The odds on the individual selections are increased by 1, after which, the resultant odds are multiplied.

You can also use an online Treble Bet calculator to arrive at the potential pay-out. You can easily choose from the various bet types available, enter the stake and take a look at the figure that could be your winnings for the day! 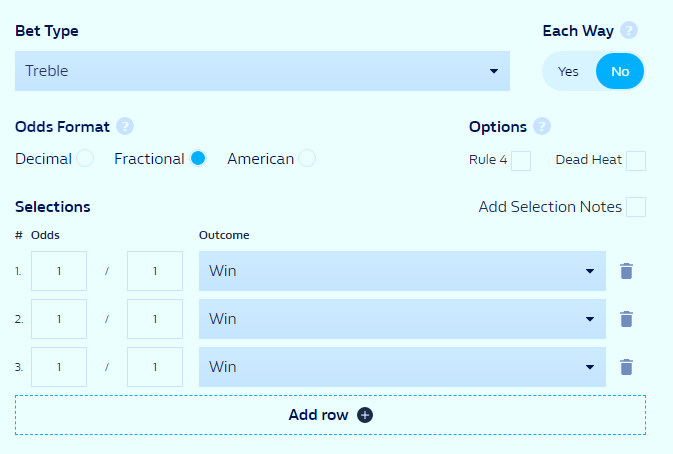 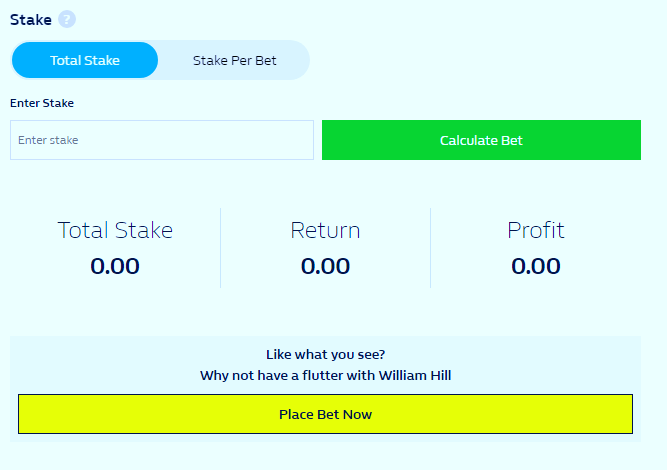 In treble betting, you back three different selections across sporting events. It is a good way to rapidly build your stake in a progressive way rather than placing a single high-value stake. Remember that each leg must win for you to win the bet. Even if one selection fails to turn up as predicted, you lose the entire stake. For example, you can bet on Liverpool to beat Arsenal in Selection A; back a 2-1 correct score to Chelsea against Aston Villa in Selection B; and fancy Manchester City to win with more than 2.5 goals being scored against Swansea. Likewise, you can back Rafael Nadal to win the Rolland Garros, Simona Halep to reign supreme at the U.S. Open Women’s Singles, and Novak Djokovic to win the Australian Open.
You get longer odds as compared to single bets, can cash in on an opportunity to earn winnings in multiples of what you would have with single bets, and bet on low-value favourites that wouldn’t have yielded much if you had bet on them individually.
Yes, you can. You can place a treble on your horse to bag pole position at the Cheltenham Gold Cup, Rafael Nadal to add another La Coup des Mousquetaires to his trophy cabinet, and Liverpool to walk out champions of the Premier League.
Yes. You will have to select three selections across different events. For example, you cannot back Rafa to bag the French Open, and bet on Dominic Thiem and Stefanos Tsitsipas to finish runners-up. That would be a tricast bet and not a Treble Bet.
An each-way treble combines three each-way selections. The E/W wagers will of course have to be placed on three different events. This serves to hedge against the inherent risk of a treble as you can still earn a tidy return if one or none of the selections win but place.

A treble isn’t the everyday bet. It is more audacious when compared to singles or doubles, and has the potential to fetch you generous returns. That’s precisely because it takes three single bets and rolls them into one, something that can pile on the odds and winnings quickly, giving you the best value for money.

The flip side is that you need to make three correct predictions to claim your winnings. One wager fails to come up as predicted, and you’d be losing the entire stake. That’s also a reason for you to know your selections inside out, and not place an uninformed wager. To know more you can also check out our detailed analysis on: what is a system bets?.

All in all, placing a treble is hitting the right balance between reward and risk, as long as you are familiar with the selections, keep track of their past performances, and can hold your nerve. Make sure to read up bookmaker reviews thoroughly to make an informed decision.