What is a Super Heinz Bet?

Here are the most important things you need to know before placing a Super Heinz bet:

How Does a Super Heinz Bet Work?

In essence, with every winning selection, the unit stake on the next selection increases.

Let us use a real-world scenario to drive clarity on how a Super Heinz bet works. Suppose you back the following seven selections in the Full-time Result market:

Here, you are making a wide variety of bets. Remember that:

Here is the Treble bet explained:

It is ridiculously straightforward to place a Super Heinz bet with any of the bookmakers we recommend on our site. Suppose you proceed with the seven selections mentioned below (odds correct at the time of writing). Heading over to Coral and placing a £1 Super Heinz bet would give you a staggering £38,744 (estimated) at a total stake of £120. That is, of course, if all the seven picks land as predicted. 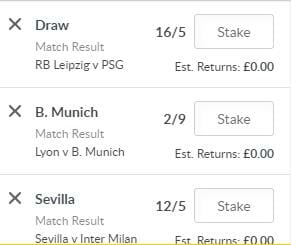 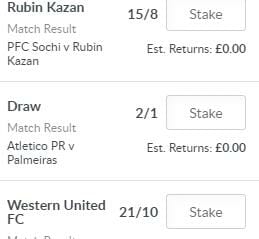 Where to Place a Super Heinz Bet

You can place a Super Heinz bet on multiple sports, as long as you have seven selections to back. However, much like accumulator bets, a Super Heinz bet is typically suited for football, horse racing, and greyhound racing.

How does this bet work in football? Well, it’s as easy as it gets. Choose the seven selections across seven matches and head to the online bet slip. Scroll down and click on ‘Super Heinz’. Enter your stake, and find your estimated winnings. You will get a payout should at least two selections land.

With even the newest UK bookmakers, you can place a Super Heinz bet across multiple markets. These include the classic Match Betting and other profitable football betting markets like Outright betting, Both Teams to Score, First Goalscorer, Anytime Goalscorer, Correct Score, and First Half Correct Score.

You can also mix and match these new and exciting football betting markets in 2020.

Placing a Super Heinz Bet on Horse and Greyhound Racing

It works exactly the same way. Choose your selections across seven events and head to the bet slip. Scroll down and click on ‘Super Heinz’, enter your stake, and find the predicted amount of winnings.

Let's take an example of Super Heinz betting on horse racing. Suppose you back the following selections in the Cheltenham Festival ante-post market:

With these selections, you can pop over to Ladbrokes and place a £0.5 Super Heinz bet with Ladbrokes and smash potential winnings worth a staggering £392,906 at a total stake of £60 (the odds in the image below were correct at the time of writing). 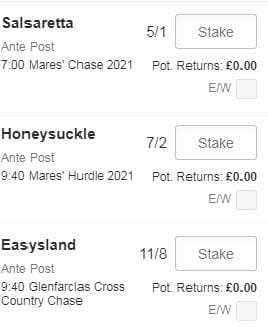 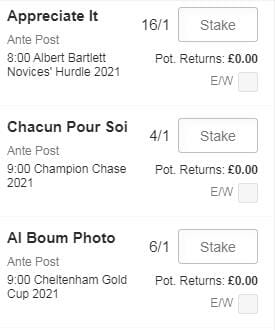 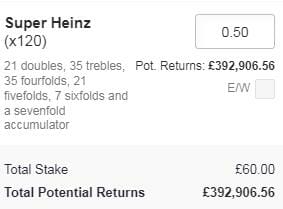 Can I Place an Each-Way Super Heinz Bet?

Of course, and you can do so precisely the same way you’d place a win-only bet. Make sure you check the ‘E/W’ box next to the Super Heinz’ on the bet slip. For more information, take a look at our detailed guide to how each-way betting works.

Usually, each-way Super Heinz betting is suited for horse racing and greyhound racing. These are incredibly popular markets, particularly during the two highlights of the National Hunt calendar: the Cheltenham Festival and anual Grand National.

How to Place an Each-way Super Heinz Bet

Suppose you back the following selections in the Ante-post Cheltenham Festival (odds correct at the time of writing):

Now that you now know more about this bet, you're probably thinking that you can do away with a complex system like this and simply go for a sevenfold acca instead. Well, sure, you can. But remember that any traditional accumulator requires all the selections to land for you to make a profit. One failed leg, and you can bid goodbye to your hopes of carrying that bounty home.

That is because, with an accumulator, you have only one winning combination. For example, consider you have backed:

For a sevenfold acca to generate returns, the combination of Liverpool-Manchester United-Manchester City-West Ham United-Tottenham Hotspur-Bournemouth-Wolves MUST WIN. Should any of the selections not win (or the game ends in a draw), you’d have to leave empty-handed.

With this bet, there are 120 possible ways that you could register sizeable winnings! More importantly, unlike a traditional acca, you only need two of the seven selections to land for a guaranteed ROI. For instance, only Liverpool and Spurs could win in the above example, and you would still be deafened by all the cash registers ringing.

That is precisely why betting this way is an excellent strategy to diversify the wager and lend security to your payout.

The only probable downside is the expense associated with placing this kind of bet. If you seek to reap the rewards, ensure that you know the sport you are betting on well, and that you are confident about the form of your selections. 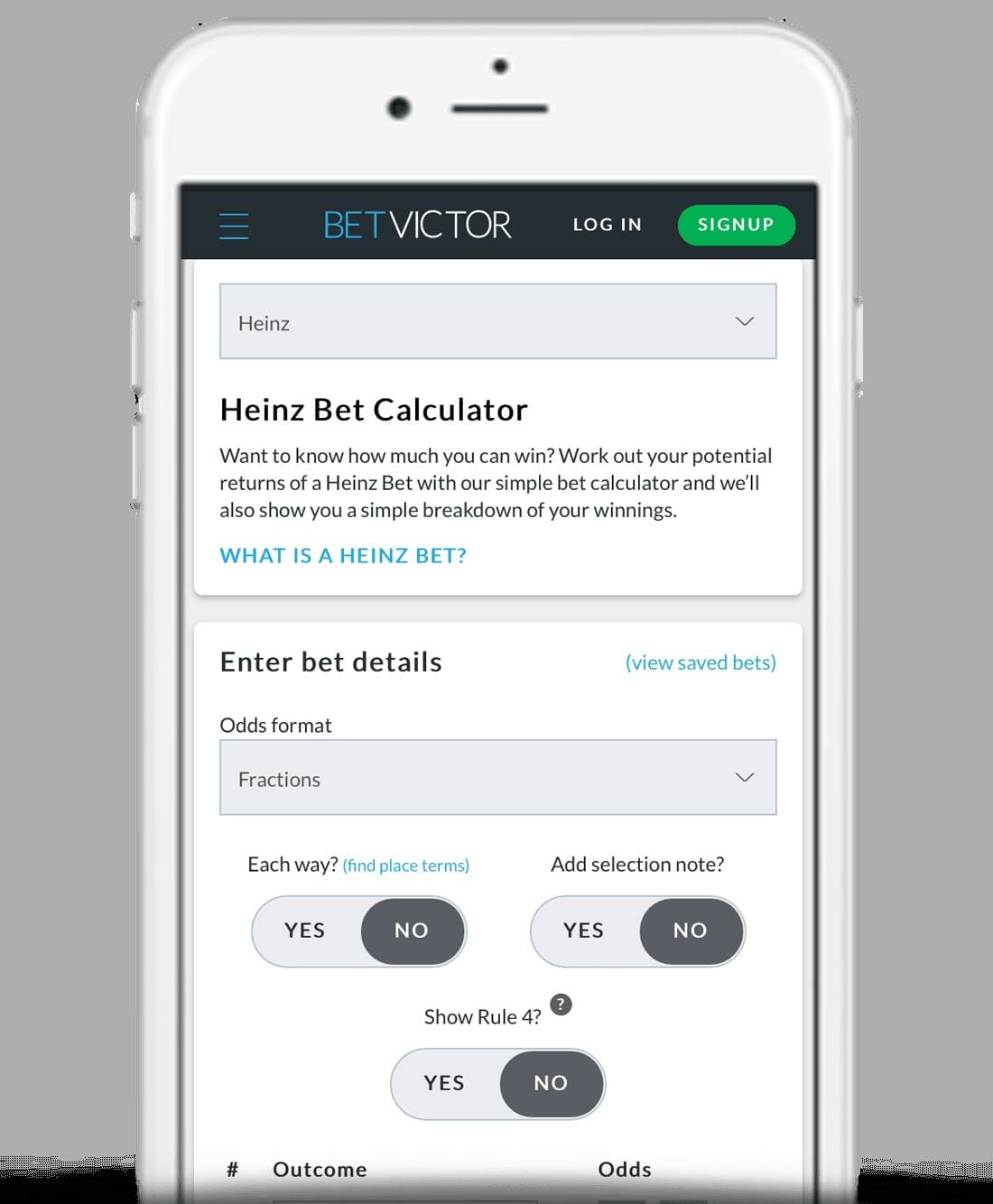 Working out acca winnings can be challenging, considering the returns from every selection that lands are compounded and then staked on the next selection. Understand that a Super Heinz bet is massive, covering seven selections and involving 120 bets.

That’s precisely why you need an online Super Heinz bet calculator to work out the odds on your selections and estimated Super Heinz winnings. Enter the odds, and type in the stake. Then, click on ‘Calculate Bet’ to find out the ballpark returns and profits.

We are currently developing our own calculator which should be up and running in no time. Keep checking this space. Until then, we recommend using a tool such as BetVictor's Bet Calculator that will automatically do the math for you.

Check out our article on what a Goliath bet is and how to place one.

A Super Heinz bet is a type of multi-bet accumulator. It is a seven-selection wager consisting of 120 bets in total — 21 doubles, 35 trebles, 35 fourfold accumulators, 21 fivefold accumulators, 7 sixfold accumulators, and 1 sevenfold accumulator.
You can place a Super Heinz on multiple sports, as long as the sport allows you to pick seven selections across seven events. That being said, the most popular sports for placing this kind of bet are football, greyhound racing, and horse racing.
A non-runner doesn’t affect the Super Heinz bet, i.e. all the 120 bets still stand. Any accumulator, for that matter, will remain unaffected by a non-running selection. The only difference is that it would be settled without considering the non-runner. For example, if you’ve placed a treble, a non-runner would make it a double.
Yes, you can. Just tick the E/W checkbox next to the ‘potential returns’ on your bet slip. Remember that an each-way Super Heinz automatically doubles the original stake. For example, if you’ve staked £1, it will total up to £240 with an each-way Super Heinz bet. That said, it creates a higher chance for getting a payout, considering there would be 240 bets now – 120 bets for your selections to win, and 120 for them to place.
The aptly named Goliath bet comprises a massive 247 bets across combinations of eight selections. A Super Yankee/Canadian bet, on the other hand, involves 26 bets from five selections.
A Super Heinz bet pays out only if a minimum two of the seven selections land. Usually, four (or more) winning selections will generate a profit on the bet. However, remember that you don’t get any return if only one selection wins, considering a Super Heinz bet doesn’t involve single bets.

You might think a sevenfold acca could achieve the same returns. Sure, it can. The only difference is that all the seven selections must win for you to get a payout.

This bet is ideal for experienced bettors who are comfortable injecting a little volatility into their bets. Nonetheless, it is good fun. Just be judicious with the stake.

Managing your money well is an integral part of betting; you don’t want to stake more than what you can afford. To make an informed decision every time, you should learn proven strategies for sports betting and read our exhaustive bookmaker reviews to find out who you should bet with.