Copa America betting is going to be at an all-time high this summer, with the 2022 Copa America is set to take place from 11th June to 10th July. Reigning champion Brazil will be desperate to defend their trophy, but will face very stiff competition from favourite Argentina. Colombia, Chile, and Uruguay also cannot be excluded in what is set to be a great tournament. Check out the latest Copa America odds, tips, and much more in our extended guide below.

As we've got some way to go till the tournament, it's understandable that not all of the best UK betting sites have released their Copa America odds as of yet. With that in mind, here are the best prices you can currently get for each team in the three most popular betting markets.

Be sure to check out our Copa America tips before making your selections!

The tournament kicks off at the Estadio Monumental in Buenos Aires, Argentina, on 11 June, with Argentina facing off against Chile. Just under a month later, the final will be played at the Estadio Metropolitano in Barranquilla, Colombia, on 10 July.

3 July: Winner Group A vs 4th Group B (Estadio Monumental)

4 July: Winner Group B vs 4th Group A (Estadio Metropolitano)

What Are the Most Popular Copa America Betting Markets?

Once you've found the best football betting sites that can offer you the most enjoyable Copa America experience, it's time to start betting! There are going to be many different markets to choose from this summer. Here are some of our favourites.

A host of top forwards are set to be on show at Copa America 2021, with Neymar, Lionel Messi, and Luis Suárez all in with a great chance of clinching the Golden Boot. However, as 2019 demonstrated when the lesser-known Everton and Paolo Guerrero split the honour, there is something to be had in backing an outsider.

One such option is Colombia and Atalanta frontman, Duván Zapata. The 29 year old is a guaranteed starter for his side, and has been known to score in bunches in the past.

Player of the Tournament

Like with the Top Goalscorer market, the usual suspects will also be in with a good chance of scooping the player of the tournament.

Once again, however, history tells us that it is often a surprise contender that ends up taking home the prize, with aging full-back Dani Alves winning the award last time out. Overall, you're better off backing a player who you are confident will go the distance in the competition.

As with most international tournaments, there is a stark difference between the best and worst teams. This has the potential to make your Copa America betting turn sour after a while.

One way to spice things up is to bet on the Asian Handicap Market. In these types of bets, each team is given a certain number of goal handicaps, depending on how likely they are to win or lose. This makes backing the underdog far less likely to end in defeat.

When and Where Is the 2021 Copa America Taking Place?

The tournament was postponed from its original date of summer 2020. Everything kicks off on 11 June 2021, with the group stages coming to an end on 28 June. The quarter-finals kick off on 2 July, while the semi-finals begin on 6 July. The final and third place playoff are set to be played on 10 July.

As to location, the United States at one point seemed set to host the action, but joint hosting honours were given to Argentina (five stadiums) and Colombia (four stadiums) in the end.

How Is the 2021 Copa America Structured? 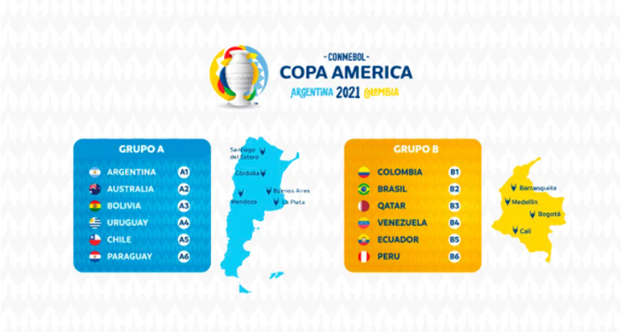 The structure of the 2021 Copa America has been shaken up from previous years. On this occasion, two groups of six teams have been drawn. The competitors are made up of the 10 CONMEBOL nations, as well as two invited teams: Qatar and Australia.

Each side in the group will play each other once, earning three points for a win, one for a draw and zero for a loss. At the end of the group stage, the top four teams out of each set of six will progress in the quarter finals. After this, it is a straight knockout until the final.

The Copa America started off as the South America Football Championship back in 1916. The competition was held on and off for sixty years, before being rebranded as the Copa America in 1975.

12 different teams will be competing in the 2021 Copa America. They will be split into two groups of six, with the top four sides progressing into the knockout stages.
The competition is being co-hosted. Four of the stadiums are in Colombia, while five are in neighbouring Argentina.
Out of the 12 teams competing in the 2021 Copa America, 10 are the sides that make up up the South American Football Confederation: Argentina, Brazil, Bolivia, Brazil, Chile, Colombia, Ecuador, Paraguay, Peru, Uruguay, and Venezuela. The other two teams, Qatar and Australia, were invited to compete.
The tournament kicks off on 11 June, with the final taking place on 10 July.

It may be taking place one year later than intended, but the wait should only have increased your appetite for Copa America betting this summer! The tournament’s new structure means that some of the continents’ heavyweights will be facing off right from the start. While you're waiting to see whether our Copa America tips and predictions come in, check out our recommendations for the best football websites for stats and analysis.