Trotting Betting Guide – Everything You Need to Know

Trotting Racing, more commonly known as Harness Racing in the UK, is a type of horse race where the horse pulls a two-wheeled trap or cart and an accompanying driver. Trotting betting on the other hand is what you get when you wager on this exciting sport!

These carts, which look a bit like gladiator chariots, are often referred to as ‘sulkies' or ‘spiders', and allow for the driver to sit back and steer. (Note: these horses do not carry jockeys either). The races can be referred to as trot races because the horses race using a specific gait, which makes it different from pacing.

In a race, the horses pull their rider-filled sulkies for a certain distance before charging when close enough to the finish line. While this might be a little known sport in the UK, it is widespread and popular in other parts of Europe, as well as in the USA, Canada, Australia, New Zealand and across South America.

What is a Trotting Race?

In the UK, trotting racing is largely unknown due mainly to the enormous and all-consuming popularity of the more familiar non-carriage, jockey based races. Quite simply, however, trotting racing is where the horses trot around the track, towing a carriage behind them, before a thrilling sprint to the finish line ensues when close enough to home. The pace is dictated before the race gets underway. Even accounting for the sulky, which is the official term for the carriage and has a driver inside, horses can reach speeds of up to 30 miles an hour.

Trotting Racecourses in The United Kingdom

Because Trotting Races are not common in the UK, only a few venues are worth mentioning here. These are York Racecourse, Musselburgh, Ludlow, Corbiewood Racecourse near Bannockburn and Tir Prince Racecourse in Wales. It is also in Wales where the nomadic Tregaron Festival, the nation's showpiece trotting event, runs each year.

To be perfectly honest, when it comes to betting, there really isn’t very much difference between wagering on trot races or our more familiar horse racing that we are used to in the UK. If you have any idea how to bet at all, then you can bet on trot races and, just as with a flutter on the 14.30 at Chepstow, the better the chances of enjoying any success with a trotting bet is in direct correlation with how much research you have put into your bet before you place it.

In short, do your homework. Savvy punters read into the form when they are parting with their money on a normal horse’s race and anyone betting on a trotting race would do well to do the same. 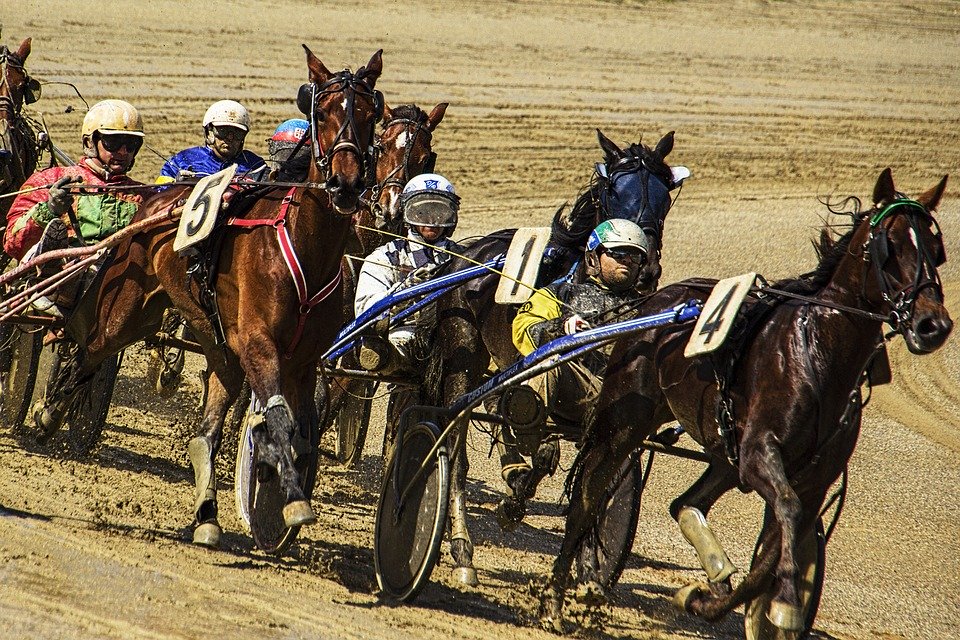 Because trotting is very often overlooked in the UK, bookmakers do provide prices for many of the trotting races that go off overseas, in Europe or the USA or Australia for example. Also, you should be fully aware that online trotting betting doesn’t have the same range of betting markets here in comparison to other sports. Happily, that isn’t to say there isn’t still fun to be had and value to be found.

Of course, as with absolutely anything in sport, a winner must be found, and where there’s a winner, there’s a wager – an outright wager, to be exact. With an outright bet, punters are required to successfully predict, while risking money for potential profit, the winner of the upcoming event. So, in this case, we mean the winning horse and cart of a trotting race.

If your online bookmaker is offering each-way betting odds, then you are in luck. Each way bets are really handy and definitely well worth considering, given that they allow your selection a certain leeway to finish well, yet ultimately fall short and still return a paying bet. This is because an each way bet is comprised of two parts. The first part is dedicated to your selection registering an outright win, while the second part is a place bet meaning your horse and its rider can finish in the top three or four challengers.

Head to head betting pits two rivals against each other and you are predicting which horse will win between two or more selections. One has to beat the other but doesn’t necessarily need to win the race in order to return as a winner.

Historians, and Hollywood for that matter, tell us that Roman gladiators used chariot races – far more bloody than today’s chases – as a source of entertainment. That may be so but as far as we know, trotting racing has quite an international post-Roman era history.

Around 1554 in Valkenburg in The Netherlands, 3,000 horses competed in trotting matches at a horse fair. This event has evolved into The Golden Whip, Holland’s most famous trotting event, and was first run in 1777 at Soestdijk.

In the UK, trotting races first took place on Newmarket Heath on 29th August 1750. At the time, the Earl of March and the Earl of Eglintowne bet 1,000 guineas that four horses would be able to lead a four-wheeled carriage with one person inside for 19 miles inside of an hour. A century and a half later, the modern-day Prince of Wales, Prince Charles, steered a trotter around the former racecourse in Lanarkshire, Scotland. However, the sport of harness racing was fully formed in the United States during the 1800s following a competition between mail delivery horses was undertaken.

🎁 What is The Difference Between Trotting and Pacing?

This is more about leg movement (gait) than it is about speed, all though there is a tiny speed difference. Trotting is where front and hind legs of differing sides move forward at the same time, whereas with pacing the entire left side moves alternately with the entire right side. Most horses trot naturally.

👌 Which is Faster, The Trot or The Pace?

Pacing is about three seconds per mile faster than trottingeven though it is slightly more unnatural for the horse and, in Europe, trotting is the only stride allowed for the majority of races.

🔍 How do Harness Races Start?

Harness races start slowly and already on the move behind a vehicle – known as a gate car - with shields that form a barrier which, when out of the way, the horses gradually increase their speed.

〽️ What Kind of Track is Used For Harness Racing?

In Wales, the home of British trotting racing, grass tracks are more popular but in the rest of the UK, all-weather tracks are in place.

⭕️ Can I Bet on European Trotting Races?

Yes, you can. Bookies will offer prices on these races because they know there is an interested community of bettors that want it.

Despite being often disregarded by Brits, racing with harnesses actually has a history in the United Kingdom, far more so than people realise. As it has developed and grown through, the UK’s nearby neighbours such as France, Italy and Sweden all popularise racing horses and sulkies far more than the British. But its regular obscurity does not mean that trot racing deserves to be ignored. Indeed, scratch at its surface and you will find a fun and competitive sport that is every bit as complex in its operation, yet straight forward enough in its betting markets as other sports. To that end, we encourage you to take a look at this interesting sport – it might just become your next obsession.

Why Is Betfair Down? What Are the Best Betting Alternatives?